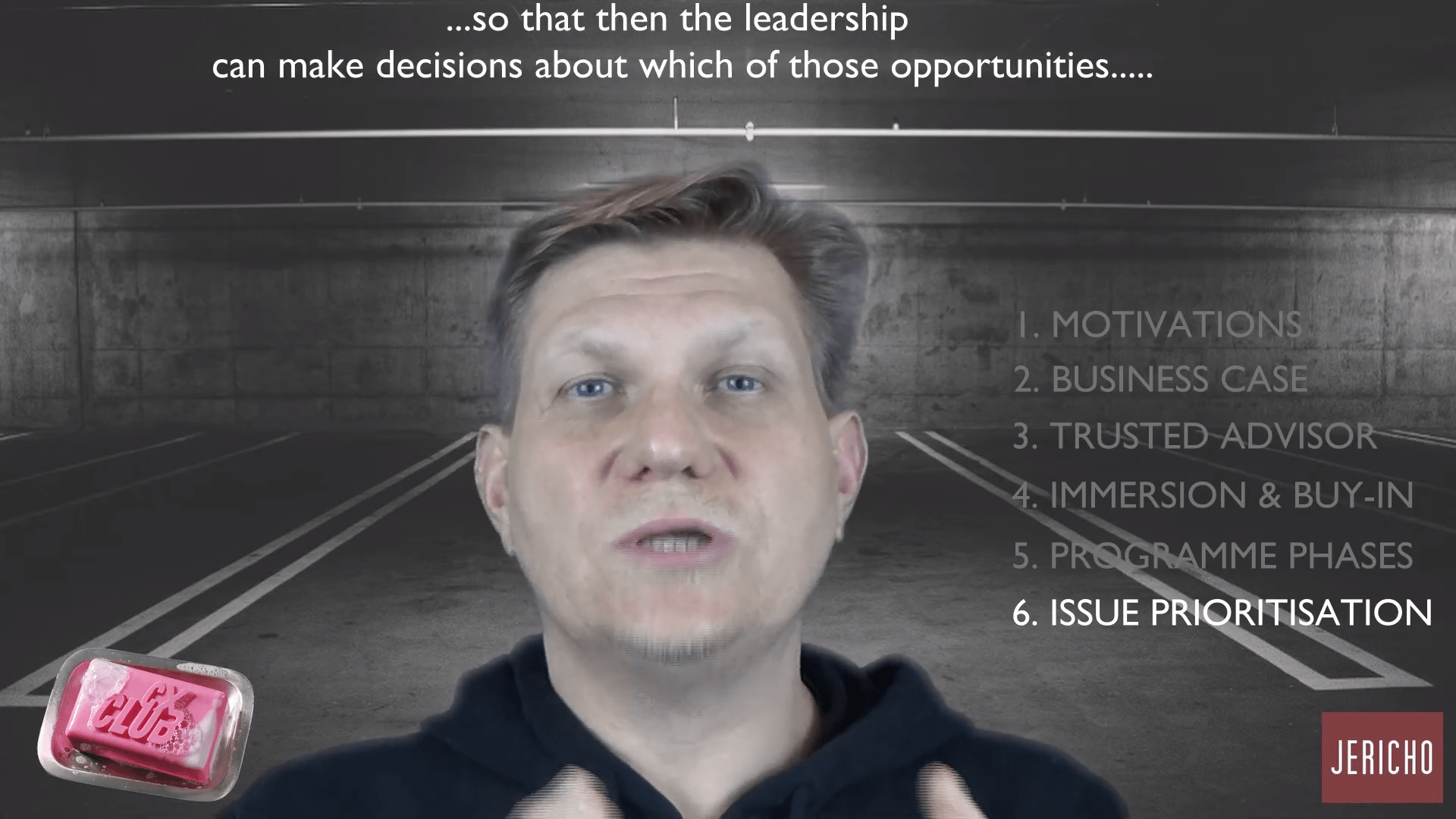 Hi, this is Ian from Jericho & CX Club, I hope you’re all doing well.

It’s been a few weeks since I did my last video and I was warned… Alan Pennington – you did tell me that this would be one major undertaking and you’re not wrong. I’ve done 5 videos so far – this is now the sixth video. In the last video we covered off the last part of CX principles, those things that underpin customer experience. Those commentaries that sit under every single aspect of customer experience, and in this video I was meant to start looking at leadership immersion and now – I had a good chat with my old ‘mucker’ Adrian Snook from Learning Accelerators and we discussed leadership and how it relates to customer experience and we realised from that discussion that the conversation needed to be much bigger than leadership immersion. Now, I’m still of the opinion that leadership immersion is the biggest aspect, or certainly the most challenging aspect when it comes to how leadership relates to customer experience, but, of course, there are other topics that need to be covered as part of leadership, so the subject is now going to be expanded and I’m going to cover six different areas.

Those six areas are now:

1. First of all what are the motivations for an organisation undertaking a customer experience project. Now, of course, some of them may be around “yes, we need to change our business, we need to transform it”, but sometimes there are other reasons why organisations do CX projects, and sometimes organisations don’t really know why they’re doing in the first place, and if you don’t know why your doing it, you don’t have any objectives and therefore you’re not likely to know the outcome.

2. The next area is about writing a business case. Now, Ben Smithwell from Commotion has spoken about this. If you don’t have a business case in place, if you cannot provide a return on investment, forget about it because the finance director in the business is not going to be interested in having the conversation, so we’re going be covering that in greater depth too.

3. Next of all, becoming a trusted adviser. Now, I’ve found that the projects that have worked best of all have been those where I have been accepted into the C suite, where I have worked alongside many of the major players within the C suite and they’ve really really bought into me as an individual and they’ve trusted me, because without that trust between the person whose coming in and saying “Look, these are the things that we need to change” and with the board of the organisation, and certainly the senior management, then customer experience isn’t going to work unless that relationship is there.

4. The fourth area is leadership immersion. So, this is all about how do we get the leadership team to buy in to customer experience, and there are a number of challenges with regard to that, because often people will pay you lip service, often they will say that they believe – and they honestly do believe it – but when you get to the point where you’re saying, “okay, you’re going to have to sacrifice either short term performance or headcount or budget”, then suddenly people get cold feet, so we need to look about how we can get around that particular issue

5. Next of all, introducing different phases of the program. Now, this is something that Sean Risebrow, whose now at Bupa, has spoken about in the past, whereby you can’t do it all at once. There are different stages to undertaking a customer experience program, and during the early stages, often it’s counter intuitive – you have to make some very difficult, hard decisions, so how can you treat your transformation programme from end to end in those different stages with different types of behaviour at each stage.

6. And then finally, prioritisation of issues. If you do a customer journey mapping exercise and you come up with a whole bunch of issues, then of course you have to go through process of prioritising those issues, so that then the leadership can make decisions about which of those opportunities and problems they want to tackle and which ones need to fall by the wayside. So, there is a process that the leadership team needs to work with the CX management team on in order to bring those things about.

I’m not going to cover any of those subjects today, I just wanted to introduce those things.

I’m also changing the style, the format of what we do with CX Club, as I’m realising that me here, standing in front of the camera talking to you, is going to start to get a bit boring. So, a number of the people I’ve been chatting with over the few weeks – I’ve been doing work as well, which has kind of got in the way – but a number of the people I’ve been speaking to as well, who are interested in the concept of CX club, want to… we going to do… it’s not going to be like an interview, it’s going to be more like a conversation between two people, who are kind of interviewing each other, having a debate, sometimes may be disagreeing with each other. So, that’s going to be the new format. Sometimes it is going to be me here standing in front of the camera and sometimes it’s going to be a two-way interview.

Thank you very much and I’ll see you in the next video.