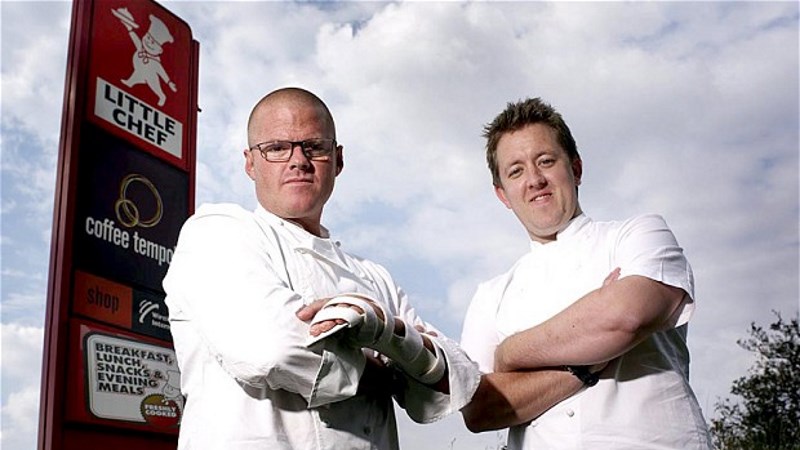 Heston Blumenthal has spent most of his career amazing people. The world-famous British chef; who is renowned for his unusual culinary concoctions such as Edible Fairy Lights, Exploding Potato Donuts & Black Pudding Chocolate Spread; could never be referred to as predictable. However in 2008, he did something that nobody could have ever expected. The owner of the three Michelin starred Fat Duck restaurant agreed to help turn around the fortunes of the faltering British ‘greasy spoon’ restaurant chain Little Chef, which had been taken into administration and rescued only two years earlier.

Blumenthal was given £350,000 and asked to re-invent the Little Chef menu and test the proposition via a concept restaurant in Popham, Hampshire. The entire engagement was captured in a series of Channel 4 documentaries aired in 2009, the final one of which can be seen here:

A few years on from this and it is probably fair to say that Little Chef hasn’t had the best of fortunes. The chain has gone from a 439 restaurants from its peak of popularity in 2000 to just 78 restaurants today. When the restaurant went into administration in 2007 it had 235 restaurants, however since Blumenthal’s involvement in 2008, Little Chef has continued to close restaurants, with 67 closures announced in January 2012. It is understood that a further 17 restaurants have been closed since then.

This isn’t to say that these closures were down to Blumenthal’s intervention. As can be seen in the documentary, there was quite a lot of resistance to the changes from the CEO Ian Pegler, who clashed with Blumenthal on a number of occasions. Pegler, who came across as an executive cliché-spouting David Brent style character and who subsequently left the business in 2010, most certainly didn’t seem to be the kind of thought-leader capable of taking the business forward. Since Blumenthal’s initial involvement, Little Chef has opened a further 10 concept restaurants following the original template, which indicates that the business has recognised his contribution as having been valid.

This being said, it can be questioned as to whether Blumenthal was completely right in his thinking at all times. A full Customer Experience audit of the story will help us to understand it in more depth:
________________
Product

Little Chef’s food had become boring, bland and expensive for what it was – the tastes of the British public had, to a degree, moved with the times and the menu had not. Furthermore, the menu was far too large to be able to manage the stock well. That being said, Blumenthal did make a couple of recommendations that, on the surface, seemed questionable.

At times it had seemed like he wanted to throw out the baby with the bath water. Blumenthal definitely needed to streamline the menu; however removing staple elements of the Full English breakfast such as baked beans from certain dishes and replacing it with grilled beef tomatoes may have ignored the dietary preferences of the remaining, although dwindling, loyal customer base. On the other hand, it could be argued that Blumenthal was helping the restaurant to find a brand new customer base altogether. So maybe phasing the beans out and the tomatoes in would have helped with the transition to that new base. There was definitely an argument to maintain both, even if only for a short time.

There were also concerns about the quality of the ingredients being used by the chain. Increasing the quality and undoubtedly the cost of ingredients would have reduced the margins on the business they were doing. In the short term, this may have been difficult for the cash-strapped business to maintain. That being said, had the menu been launched in all of Little Chef’s restaurants; and had the fortunes of the entire chain picked up to the same extent as the concept restaurant, then the business would have quickly established the buying power needed to have bought larger volumes of the better ingredients at a cheaper price. Furthermore, the reduction in waste that would have resulted from the decreased inventory associated with a smaller menu would have also improved the business’ control over costs.

So, were his recommendations on the food right? Well, on the whole, of course they were – he’s the world-famous chef after all! Would have kept those beans though….

With the increased quality that Blumenthal was suggesting, it would certainly have been possible to maintain the price. This would, of course, have led to decreased margins in the short term; however as stated above, better quality would have led to increasing demand, scale economies and better purchasing power; which would have improved margins in the longer term. In fact, with a new customer base in focus, there may even have been an argument to increase the price.

To maintain its position as a national brand, Little Chef would have benefited from keeping more of its restaurants open. Had the chain decided to expand Blumenthal’s concept quicker across its network, maybe it would have rescued some of those restaurants that have been closed over the past five years.

Having Heston Blumenthal on side was a real coup for Little Chef. The problem was that they didn’t realise that was the case until too late. You could have even accused them of seeing their engagement with him as being some kind of cheap PR stunt. The series of documentaries really increased the profile of the business; however unfortunately not necessarily in the right way. Ian Pegler’s antics turned the business into a bit of a laughing stock and they failed to properly cash in from their association with Blumenthal.

Herein lies the key ‘question mark’ with this story. Was the success of the concept restaurant as a result of the decisions being made by Blumenthal; or was it the fact that it was Blumenthal making the decisions that made it a success? Had the same decisions been made by someone who wasn’t a celebrity chef and there hadn’t been as much exposure for the story, would they have experienced the same degree of success? This is difficult to know.

That being said, exploiting their association with Blumenthal would have been a very common-sense thing to do. They failed!

The people in the business were tired and demotivated. They had asked over the years to do more with less. Exploiting the knowledge of Blumenthal and sharing it across the business would not only have helped them from a skills and competency perspective, it would have also bolstered the general morale of the business.

The restaurants were growing tired, old and shabby in their appearance. The face-lift that Blumenthal gave the concept restaurant was undoubtedly a great move. The new interior was modern and cool, yet remained simplistic and functional in line with the basic principles of the brand.

However, whether the business had taken a really hard look at the brand itself is another issue altogether. The business didn’t seem to really understand what it stood for and how it should be communicating that through its brand. Taking a look at the logo, menu and interior of the restaurant as it stands today, it doesn’t seem to have moved on a great deal in the last 30 years.

The customer process wouldn’t have needed to have changed a great deal. There would have been a few subtle differences, such as finding it more difficult to find a spot to park (nice problem to have) and needing less time to figure out the slimmed down menu; however on the whole, it would have stayed the same.

Considering all of the above, did Heston get it right? I think it’s fair to say that, on the whole, he did. That being said, it will always be difficult to know whether the success of the concept restaurant was a result of the decisions made or the profile of the decision maker. If someone else of a lesser profile than Blumenthal had been making these decisions, you can’t help thinking that success wouldn’t have been achieved without a full repositioning of the brand proposition.

That being said, had they fully embraced the opportunity and rolled out the concept in all of the outlets, maybe their shareholders would have been benefiting from the profile of the decision maker rather than the decisions themselves. As long as it had been successful, they probably wouldn’t have cared…