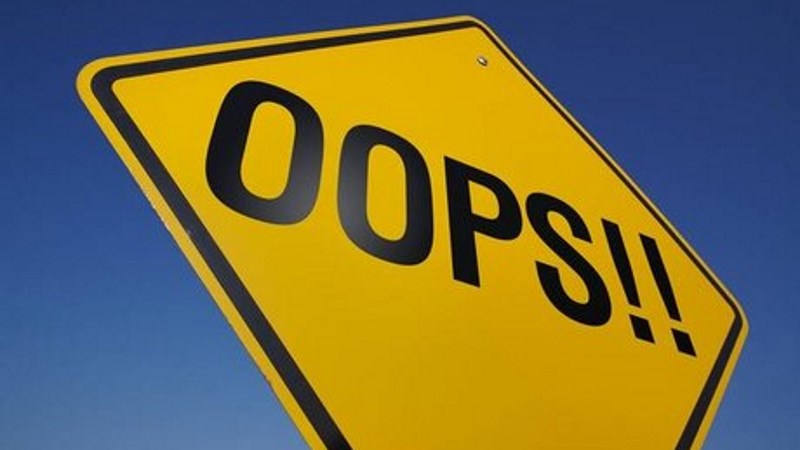 The next two parts of the ‘Doing the Opposite’ series focus on the subjects of ‘deliberately making mistakes’ and ‘unlimited staff holidays’, the second of which we will come onto in the next blog. Both are quite controversial and require an element of ‘tongue in cheek’, however they do have some interesting principles that could be of genuine interest to contemporary business.

Now just to get things straight – I’m not seriously suggesting that businesses should deliberately make mistakes. However it could be argued that some businesses get so obsessed with perfecting systems & processes, they forget one very important factor…

…started as an idea with a blog we wrote earlier this year called ‘Service Recovery vs. Right First Time – which is better?’. Whereas you might assume that Right First Time would be the ideal that most businesses strived for, the article also argues that Service Recovery has its benefits, as all businesses make mistakes (following the ‘to err is human’ argument from the second instalment of the ‘Doing the opposite’ theme).

Everyone appreciates that mistakes get made, as we’ve all made them. It doesn’t necessarily mean that we like them, but we do understand them. The key to rectifying a mistake sits as much with how you resolve the issue as it does with the resolution itself. It may be a systems, process or communication breakdown that causes the problem in the first place; however it is always a person that resolves it. Resolving an error made by the business gives the company an opportunity to show its human side, and in doing so helps the business to build a stronger bond between the customer and the brand.

At a conference I was speaking at last month, I examined this principle in a discussion with a fellow keynote speaker Joseph Jaffe (@jaffejuice), where I threw forward the idea that maybe businesses should be deliberately making mistakes in order that they attempt to rectify them in a human way, thereby creating more opportunities for the business to create bonds between the brand and customers. We laughed about this at the time, however with my permission Joseph wrote a blog about the idea, which can be found here.

It is a strange idea indeed and I hope that it is one that nobody ever attempts to test; however it does suggest the need for businesses to change their attitudes towards errors. Of course, companies should attempt to minimise the number of errors that are driven by breakdowns in systems, processes & communications, but you cannot eliminate them all – there will always be some left over.

It is an old business-speak cliché; however when companies start to see the remaining errors as opportunities to be human, then these errors won’t necessarily be viewed in such a bad way. Striving for perfection doesn’t mean that you cannot appreciate the beauty in imperfection.

One thought on “Doing the Opposite, Part 3: Deliberately Making Mistakes…”